Steriflow continues to focus on innovation 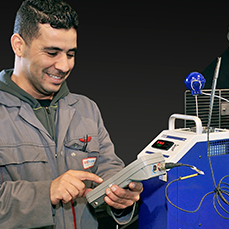 The year 2016 was the year of major innovations for the leader in the design and manufacture of autoclaves for sterilization and pasteurization for the agri-food and pharmaceuticals industry. It has seen its turnover grow over the last three years.

“We have seen an increase in our regular sales for the last three years,” said Charles-Henri de la Motte, President of Steriflow, a specialist in sterilization and pasteurization for the agri-food and pharmaceutical sectors. The company, whose headquarters and production plant are based in Roanne and commercial offices in the Paris area, reached € 20 million in sales at the end of the last budget year. The total workforce is about 100 employees, including a dozen based in Clichy. The design offices comprises about 15 people, whose missions are both to meet the needs of customers but also to continuously improve the processes. After fluctuating periods in its business, Steriflow uses the interim to satisfy its needs in terms of personnel during this period. “We also use subcontracting,” says the President of the company.

Export volumes range from 75% to 80%. The largest sales are made with Benelux, Germany, Poland, Korea, Mexico, Morocco and Jordan. The company counts among its customers references like William Saurin, Euralis, Saupiquet, D’Aucy, but also local companies like La Ferme Collet … 2016 will have been a rich in innovations year starting from the know-how developed since 1974. The sterilization and pasteurization patented thermal processes are used for 90% for the agri-food, the rest for the pharmacy. They serve to preserve foodstuffs in the form of cans (iron / steel), traditional glass jars, trays and vacuum pouches (vegetables, prepared meals, baby food …). The desired results depend on the process used and the temperature levels.

The basic process has hitherto been based on the static technique with overheated water runoff. The stainless-steel baskets containing the products (bottles, pouches, syringes, vials …) remain static under the water runoff throughout the cycle. This method of sterilization is one of the most used because of its homogeneity and its mechanical reliability. Three years ago, the company developed a new air / steam process mixed with a turbine. In 2016, it developed a linear table facilitating fast maintenance for Skaka. “The production stoppage is avoided as much as possible,” explains the manager, “and the table that supports the basket is resisting a longer time.” A strategic factor for industrial companies. Another innovation, aimed at artisans this time, with a new manual system facilitating the loading of small Shaka autoclaves. It is the fruit of a collaboration with the roannais Aprres industries.

By 2015, Steriflow had expanded its premises with an area of ​​450 m² to dedicate it to machine tests or “FAT” (Factory Acceptance Test). “After validating the needs, the drawings and then the machine, some customers want to validate the autoclave under real conditions. Since two years, our FAT space allows them to test the autoclave dynamically on our site “. Another recent significant advance made by the company, the development of the Shaka autoclave. Instead of static, the basket is shaken up to 150 strokes per minute. “A successful diversification,” says Charles-Henri de la Motte. Lastly, among the regular investments, in 2017 is a welder for 100 000 €.!undefine”At the same time, we are continuing to upgrade digital interface controls to make them more ergonomic. We currently have multi-touch screens in 16 / 9e. Our efforts also focus on traceability and remote maintenance. Even if half a dozen of our operators travel to the customer for the installation and commissioning of autoclaves, the option of remote maintenance is particularly valuable for our customers based abroad.