Today Steriflow is considered a leading Air Steam specialist. We have worked to become a major player in this field, as well as our competitors by developing our expertise.

We also have clear guidelines essentially based on Design. Studies have been carried out to provide a safe principle which is not subject to any particular risks relative to other designs with other trademarks than Steriflow wich have proven themselves to be less reliable. Much effort has gone in order to provide a safe retort

Filled retort baskets are inserted into the STERISTEAM. The door is closed then locked automatically through a hydraulic cylinder. It is mechanically blocked throughout the entire cycle.

Pre-heating of the enclosure is carried out by direct-steam-injection. Pre-heating temperature can be adjusted (e.g. 100°C – 0.2 bar) and air vent valve open. Adjustable period (e.g. 5 minutes).

Heating phase can be started. Heat is produced in the enclosure by direct-steam-injection. Dissemination will be made between each basket. Graduated acting steam valve opening is monitored by MPI until the set temperature is reached, for instance 121°C. In this heating-up phase, the fan is on. The operation of the fan is continually monitored. Condensates are stored in the lower part of the enclosure.

Once the scheduled duration of the bearing comes to an end : pre-cooling starts.  It is performed by injecting cold water in the vessel via two lateral spray headers. This water accumulates at the lower section in addition to the condensates previously accumulated. The water level is controlled by a radar level and managed by MPI.

Once the set temperature is reached, final cooling is carried out by cascading recycled water on the load.

How does the cascading system operates ? Recycled water is made with steam condensates previously accumulated in previous phases as well as water make up. The mixture is pumped at the sterilizer lower section through the secondary circuit of an external heat exchanger (plates and gaskets), and returned on water distributor laid out on top of the load to cool. 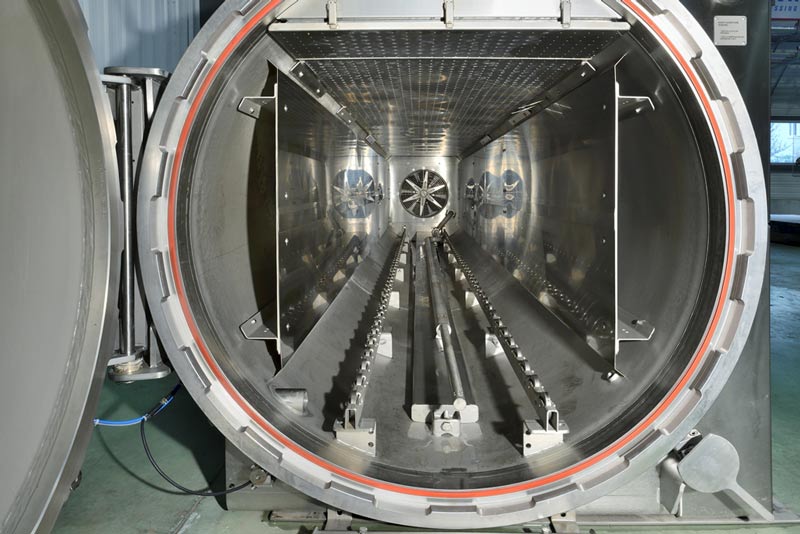 *We also have the capacity to adapt to your needs. Do not hesitate to contact us to discuss your specific requirements.

The sterilization temperature (sterilization value or FO) is defined by the manufacturer and will depend on the initial contamination of the product and its bacteriological characteristics.

Steristream has a powerful pump coupled with high flows of cascading water. It provides shorter cycles more homogeneous compared to other Air Steam retorts on the market. All products within the autoclave are treated the same wherever they are located. Reducing time cycles also provides better operating performance.


Enables to accurately control the volume of water at the cooling phase.

Types of packaging or products :

To define within the parameters required, please contact our teams of experts for advice.

With the Air Steam, we can provide you products designed to offer a top safety level based on your settings. Over the last few years, we have already equipped a large number of customers who already knew and used this process.

That allowed us to to demonstrate our effectiveness in this area, but also to be a major quality player in this field.
You have specific needs, we have solutions for you !

Defined to fit in with the process. Standard basket are designed for pouches.