Accueil » News » Steriflow, a presence on Moroccan territory and more for 30 years

Steriflow, a presence on Moroccan territory and more for 30 years 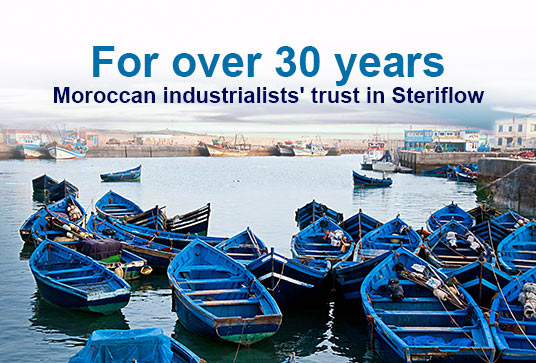 Steriflow, a presence on Moroccan territory and more for 30 years

With about thirty years presence on Moroccan territory and more than 200 industrial autoclaves installed in the country, Steriflow has once again imposed its superiority on the industrial sterilisation market, of which it is the leader. Since the beginning of 2014, the Moroccan government has granted permission for the construction of 6 fish canning plants in Dakhla, a small town on the Moroccan coast. A challenge launched to revitalize an area of the territory, that is difficult to access in the south. Thanks to its local service and reputation, Steriflow has equipped 5 fish canning companies with Static Steriflow.

Steriflow's proximity and professionalism in Morocco

Steriflow’s presence in Morocco enables it to offer a support service to the food industry. Its local partner provides start-up and calibration services, as well as the sale of spare parts for Steriflow industrial autoclaves. Steriflow in Morocco assists manufacturers in obtaining FDA approval and certification for their exports to the United States. Long term presence in an “aggressive” environment proves the robustness and reliability of the machines.
Steriflow Static
Characteristics: Model with overheated water run-off – diameters from 900 mm to 2300 mm, capacity from 1 to 12 baskets depending on model – Suitable for all types of packaging – Short and homogeneous cycles – Reduced maintenance and simplified servicing